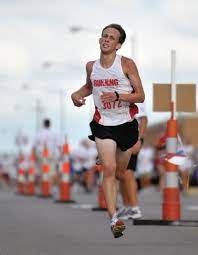 There is nothing unique with my introduction to running. As an elementary kid, I remember the playground races that involved a shuttle run over the black top on an out and back course of maybe 50 meters tops. Growing up with two brothers, I was experienced with the competition side of running and have always been drawn to it. It was this type of competition that saw me run my first road race at the old "Zoo Run" in Lincoln when I was in probably fifth grade. This race was the first opportunity I had to lay claim to the title of "fastest Watley"; of course I didn't retain the title long.

As an awkward junior high kid, I gravitated towards football, because who didn't want to emulate the incredible college football upsets that happened on Saturdays? Or the spectacular plays made in the NFL on Sunday? Being young for my grade, and having a non-football body type, it only took one attempted tackle to knock knees with a bigger guy and find myself limping around school for the next week. I may not have admitted it to myself that week, but I knew tackle football was not in my future (and I bet my parents and coaches knew it too).

I did go out for track at Lincoln Christian my 7th grade year. I don't remember how it all shook out, but I ended up being classified as a "distance runner", probably because I had no speed for sprints, no hops and no strength. I will call it distance runner by default. The way my own mother tells the story, when the gun would go off in a 1600m run, the question wasn't if I would get last, but if I would be last or next to last.  Yep, I was that good.

In 8th grade, I ran my first cross country season, but I guess it never registered to me just how short the races were. I'm not sure if everyone had it this way or if it was because we were a smaller school, but I felt like the races ranged from 0.75 miles to maybe 1.5 miles at most. This really was more of a sprint than anything. Needless to say, I never finished in the top of our team, much less top of the race. During the 8th grade track season, I tried to quit a couple weeks into practice, but my parents had a rule that once you start something you aren't allowed to quit, and in hindsight, I am thankful for that. I continued to run only the 1600m, and the peak of my season was running maybe 5:55 at the last meet of the season. Definitely nothing to brag about or indicate future success.

My older brother was into cross country, and I suppose that competition continued to motivate me to at least go out for the sport. The summer before my freshman year was the first time I had ever dedicated myself to training, and by that, I just mean consistent running. Looking back, I felt that the Lincoln Christian coach at that time was great with building stair-step plans that would gradually increase mileage and intensity over the four years of high school. It wasn't a one-year look, but a four-year plan. That first summer, I ran 150 miles with a long run of 6.2 miles at the 2001 Thunder Run. The only reason I ran that race? Yes, my older brother. He convinced me and a friend that no 14 year old would sign up for a 10k and that we would be sure to place top 3. He was right, there were only three in our division, but I will never forget the feeling of being passed by someone pushing a stroller and running a 50:01 10k.

That first cross country season was uneventful, but the highlight was winning my first (and only) JV race at the Filmore Central golf course in 18:45-ish. For the most part, I imagine I was a 19:30 - 20:00 5k runner. Over the winter, I played basketball, so winter running was a foreign concept for me. Our track distance squad was small, so I remember almost always getting to run the 3200, the 1600 and the 4x800 if we had enough for a team.

The peak for me as a freshman was the Seward JV meet where I ran both the 3200 and 1600, competing against that same friend I mentioned from the Thunder Run. I don't remember my 3200 time, but I led the entire race, but with about 100m to go, a kid from Seward tried to pass me. Let the competitiveness kick in! I won the race (barely), but it was the first taste of success. Later in the meet, I won the 1600m with another sprint finish in a time of 5:01.

That track meet (along with the cross country JV meet) got the competitive juices flowing and kickstarted me for the rest of high school. When I was a freshman (and sophomore), Lincoln Christian was in a weird spot. For cross country, we were class C, but in track, we moved up to B. That meant we had to face distance powerhouses of Beatrice, Norris, York and Seward at Districts. Said another way, when you are looking at guys like Chris Dunker, Cody Waite, Jake Schmidt, RJ Robinson and Tom Unger, you don't stand much of a chance as a freshman. As it turned out, my PR's ended up around 10:50 in the 3200 and 5:01 in the 1600.

This is definitely a longer story than one post, so I'll put a bookmark in this and finish the rest this week. Happy Running!