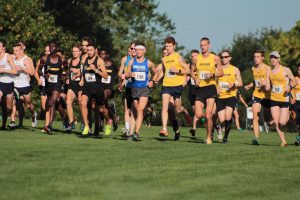 After so many years at Pioneers Park, the Woody Greeno/Jay Dirksen Cross Country meet took to a new venue in 2018 as the race was held at the Mahoney Golf course in east Lincoln on Saturday, September 15th.  The women tackled the 6k course with exactly five women (the number needed to score) and did not disappoint as they finished 14 of the 21 total teams. This included many D-1’s schools who were running the course as a preview to the Big Ten Championships that will be held at the course on Sunday, October 28th.  The team was led by Katie Fitzsimmons (36th, 22:39.9) and Erica Doering (46th, 22:52.9), while Laura Tarantino also finished in the top 100 (83rd, 23:48.8). Ashlyn Glann, who battled through some respiratory issues, and Kelly Messbarger, who willingly accepted to sacrifice her Saturday to be the fifth and final scorer, rounded out the team. In total, 216 women tackled the 6k distance.