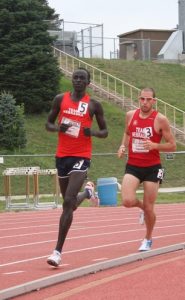 Team Nebraska was founded in 2001 by Will Lindgren to advocate and provide opportunities for serious and talented runners in the state of Nebraska.  In 2004, Team Nebraska was one of just over a dozen clubs selected to USATF's pilot Elite Development Club (EDC) program.

2005 marked the beginning of Team Nebraska’s long-standing relationship with the club’s major sponsor, Lincoln Marathon.  Over that time, race directors Nancy Sutton-Moss and Gary Bredehoft provided constant and generous support of the club and its mission.

*Mike Morgan, who competed in the 2005 USA Half Marathon Championship in Houston, TX, and ultimately moved on to a professional running career with Hansons-Brooks where he represented the USA at two World Championship Marathons.

*Suzanne Weeder-Einspahr, who competed at USA 5k and 10k National Championships from 2004-2006, and qualified for two USA International Ekiden Teams, competing once in China and once in South Korea.

*James McGown, who qualified for two consecutive Olympic Marathon Trials in 2004 and 2008.

*Angee Henry, who in 2010 won the “Outstanding Performance by a Female” award at Club Track Nationals after her wins in the 400m and 800m, as well as a third place finish in the 200m dash.

*Aubrey Baxter, who won the 2011 “Most Valuable Female Athlete” award at Club Nationals in New York after she won and set a new record in the shot put, placed second in the hammer, third in the discus and fourth in the javelin. Aubrey also placed 7th in the hammer throw at the 2011 Outdoor National Track & Field Championships and 8th place in the same event at the 2012 USA Olympic Trials.

*David Adams, who placed 10th overall at the USATF Club Cross Country Championship, which is the highest individual finish in club history. David also qualified for the 2012 USA Indoor National Track and Field Championships in the 3000m run, ran a sub-four mile at the Glenn Cunningham Mile in Lawrence, KS, and finished the 2012 season qualifying for the finals in the 3000m steeplechase at the Olympic Trials.

*Bridget Easley, who qualified for the 2012 Olympic Marathon Trials.

Over the years, Team Nebraska had many USATF Club National Cross Country Championship appearances, peaking in 2012 (Lexington, KY) with full teams for men, women and masters women, along with two full men's teams for the masters.

​
Also in 2012, Kelly Crawford was installed as the new club President, and Team Nebraska continued to encourage an interactive running atmosphere within the club as well as the running community.