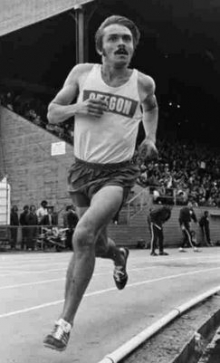 Over the weekend, I saw on Twitter that Steve Prefontaine would have turned 69 had he not died on May 30, 1975. As any runner can attest, Steve Prefontaine is a household name despite nearly 25 years passing between his death and my introduction to competitive running. To be honest, while I had heard of his quotes like "A lot of people run a race to see who is fastest. I run to see who has the most guts..." and "To give anything less than your best is to sacrifice the gift.", my eyes were opened in college when my roommate (Quinn Lewandowski) introduced me to the Without Limits movie. Now, I haven't seen Prefontaine so can't compare it to that movie, but it reinforced in me the thought that while I may not be as talented as other runners in a race, I can be harder working.

I won't ever know what it was like, especially in the running community, for those alive in 1975 to lose Pre unexpectedly. Today, however, I was rocked by the news of retired NBA star Kobe Bryant's passing. Like my brother Paul said, "I don't know if I've ever been so shocked by a famous person dying". In the last 12 months, the world lost Neil Peart (for all those Rush fans), Bill Buckner (Red Sox) Nipsey Hussle (rapper) and Luke Perry (Actor), but something was different about this. The closest thing I can compare it to in my lifetime was the news of Michael Jackson dying in 2009. This was different, though.

I grew up like any other normal, midwestern boy...with plans to be in the NBA some day! Topping out at  5'9", 140 pounds wasn't going to cut it, but that didn't stop me from launching buckets in our front driveway with/against my brothers yelling "KOBE!" with each heave. I'm sure more went in that didn't. It is just amazing to me the impact that someone can have on you; someone you never met, never saw except for Sunday afternoon NBA games on the TV. I've been feeling old and nostalgic lately, but for the most part Kobe stopped being Kobe after the 2012-2013 season. In his own words, his body was just letting him down. Granted, he had a game here or a game there where there might be glimpses, but it wasn't the Kobe I had spent over half my life watching. Then there was the last game of his career. I don't think any summary I could provide would do it justice, so spend the six minutes and watch the final game against the Jazz.

I can't speak to Kobe the husband or Kobe the father or Kobe the person, I mean, I never met the guy and won't pretend that I did. One thing I do know, though:  he was one heck of a basketball player.