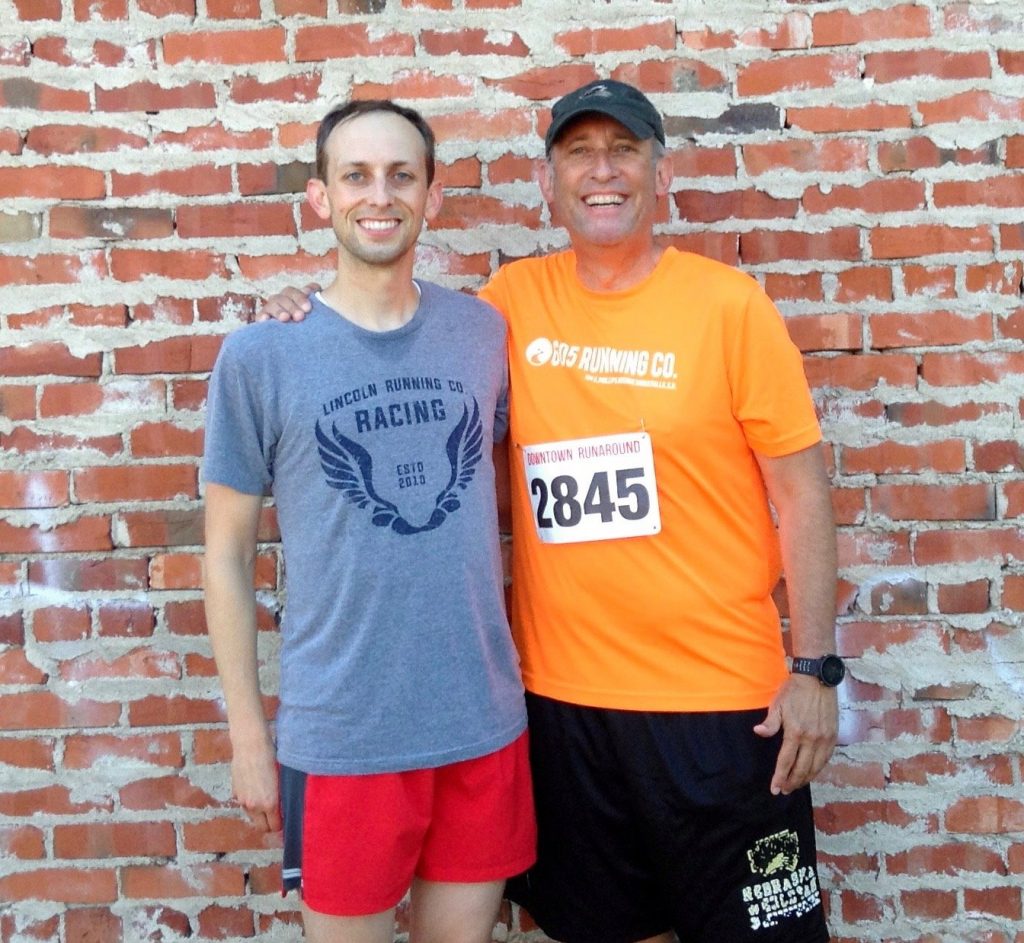 Occupation/Degree you are working towards: Portfolio Manager at Access Bank but background is a Certified Public Accountant.

What is your running background? I first started running with the 7th grade track season. I played football in the fall of 7th grade, got hurt trying to tackle a much bigger 7th grader and that was the end of my “illustrious”, but short lived football career; I decided that at least in running, other people weren’t going to hurt you (at least not intentionally). I tried to quit 8th grade track because it was “hard”, but my mom wouldn’t let me (those moms). As I started to run more, I got better and was more competitive. It was the competition, along with the comradery, that made running fun in those early years.

After high school, I attended Nebraska Wesleyan University with the idea that I would be a steepler (since it was the closest distance to what I considered my best distance in high school). After an indoor practice where I time trialed a 1500 with Eric Noel and a couple practices of very poor water jumps, I was relegated to the 1500 and really focused on those short, long distances the rest of college.

What are your future running goals? I would still like to be running when I am 40 (and 50 and 60 and 70). Probably not that fast, and probably not that far, but I really want to be that one old guy with the short running shorts and a cane showing up at races.

Do you do anything to stay injury free? As I’ve gotten older, I’ve really focused on stretching. Even if it’s just a handful of stetches for 30 seconds each, I figure that is better than nothing. I’m also pretty protective of my sleep, which is typically in the 7-9 hour range.

Do you have a favorite running book/podcast/movie/athlete? Any Will Leer fans out there? Will was a DIII athlete at Pomona in Claremont, CA and has been a stalwart at nationals since he graduated. He was in college around the same time as I was, so I remember what a stud he was in a variety of distance events, from the 800 to the 5,000. Definitely worth looking at his wiki-page.

What is your favorite race you have competed in the past? It is hard to pinpoint this, but probably the 2007 GPAC Conference Meet. It was my first conference meet and the energy around the stadium (mostly from track teammates) was insane. It was a fun meet to be a part of where NWU won by ½ a point. I remember specifically in the 5k a tunnel of track teammates at the 200m mark creating a tunnel effect of cheering.

As far as post-college, probably Shamrock Shuffle. It has the feel of a marathon without the distance.

What is your number one bucket list race you would like to do in the future? London Marathon. I have put my name in the lottery six times and haven’t been picked yet. Here’s to hoping 2020 is my year!

Do you have any advice to other runners? Keep a balanced life. It’s great to be fast, and that doesn’t come easy, but there is something between pouring everything into running and being out of the sport completely.

How long have you been an LRC-Nebraska member?: Since the beginning. 2010.

What excites you the most about being an LRC-Nebraska athlete?: I get excited when I get to talk running and be a part of the running community. I’ve met so many incoming members who have the potential to add something to the team’s culture.

What does a typical training week look like for you? Walk us through your daily routine (training related and otherwise): Uh-oh. I’ll be the first to admit my training has taken a back seat for several years. Right now, I am running over lunch, so I drive over to the gym, hit up Keystone Trail or the treadmill for 6 miles, stretch, take a quick shower and head back to work. I’d like to get in the routine of doing a couple longer runs on the weekend, but it’s usually dependent on if anyone is willing to meet up with me (hit me up if you are!). I’m regularly hitting 30 miles, would like to regularly hit 40 with a shot to hit 50 if everything goes right. I think the days of 60+ mile weeks are probably behind me for the next decade.

We all approach training and racing differently, so tell us what your short-term and long-term goals are with running: Short-term, I want to hit the competitive program standard (75% age grade). Long term, as mentioned above, just to keep at it.

Where are your 3 favorite places to do long runs at the moment?: 84th and Mopac (heading east), Mopac in Springfield heading towards the river and Ta-ha-zouka park in Old Elkhorn out to 216th as far as I can go. The third one is country highway (no gravel), but if you hit it at the right time of day in the fall, there is nothing that beats the environment.

After a solid race or long run, what is your favorite meal to demolish and replenish those calories? Please use details and give recommendations!: Abelardo’s Breakfast Burrito is a popular choice, or Juice Stop is good too. Does a six mile run count as a long run? Asking for a friend…

Share a crazy training or racing story, or simply an interesting moment in time: There are so many stories that it’s hard to pick just one. There was the time a college teammate tried to hurdle a chain post and ate gravel, or the time that same teammate had to sprint to the ditch on a long run after a late night of partying, or the time we ran from Lincoln to Waverly (or Lincoln to Eagle) just because. I’ve been around long enough I’ve just about got a story for everything. I think that’s the true sign of aging well.

What book are you currently reading or TV show are you binge watching?: I actually just finished reading a book called Captivated that I thought might help me be a good dad to my daughter, Isla. I think I need all the insight I can get! I haven’t binge-watched a TV show for awhile, but I think it’s probably about time to go through The Office again.

You’re the star of a running movie, and the opening scene is you running on a winding dirt road, with a beautiful sunrise. What song is playing in the background?: This song has changed over time, but the one that is tried and true is “I’m Gonna Be (500 Miles)” by The Proclaimers. Love that song.

← Hey Fred Carnahan, What is Cross Country to You?Buffalo Run 2019 →