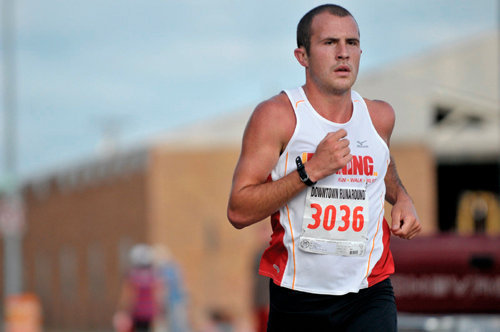 "Hello! Our organization is called LRC Nebraska, and we will be celebrating our 12th year of existence this summer."

Gallup Strengthfinders is a popular assessment tool that I have used in several different ways in the past decade. One of my top strengths is context, which simply means that I enjoy thinking about the past. I understand the present by researching its history. I can see an easy application to that with our running team as I took at the historical events that brought us from where we started to where we are now (and where we hope to go).

For a brief summary, check out "The Beginning" page on our website, but as a recap, LRC Racing started in 2010 by myself and a couple former Nebraska Wesleyan teammates. As I look back on the past 10+ years, I can divide it up into three distinct time periods.

During this time period, we spent a lot of time trying to figure out who we were and what we wanted to be. While our membership started as just five men, we worked to grow the team and to add a women's component as well. We were all happy with some comped race entries and a jersey to represent the organization. Looking back, things were not nearly as organized as I would like to think, but we still enjoyed showing up at local races together and taking home a little bit of prize money.

A few highlights for me personally was the introduction to marathon running with teammates and friends. In addition to the training and Saturday team long runs, there were a some specific memories where a group of us would sync our schedules for a race:

1) 2011 Lincoln Marathon - I ran ~2:51 in my marathon debut while my good friend and teammate, Eric Noel, knocked out a 2:32 debut.  I basically had to walk the last three miles, and even after finishing, I could barely walk back to my car after the race.

2) 2011 Chicago Marathon - I ran a then half marathon PR over the first 13.1 miles (~1:16), but still struggled with walking and keeping down fluids the last 3-6 miles; still a minute faster than Lincoln. A few more specific stories I won't put here (I do reserve the right to post at a later date), but this was the first big trip with my wife after our honeymoon. She still reminds me what it was like for her to be the only girl in a group of four guys, and all the greasy, cheese-covered food we just HAD to eat

3) 2012 Boston Marathon - 80 degrees at the start, 90 degrees within the first hour. Enough said about this terrible, 4+ hour experience.

4) 2012 USATF Club Track - This was our first foray into the world of USATF events. This event was in our backyard, and I felt as though we represented well. An interesting fact, but USATF Club Track is no longer a thing and probably hasn't been since it was held in Omaha.

During this time period, LRC Racing grew up a lot. Membership continued to grow, and we formalized our organization through legal documents filed with the state and an approved 501c designation with the IRS. In October 2013, LRC Racing won the Market to Market Relay while setting a record for fastest pace over the course of the race. This catapulted the team into a head-to-head battle with Team Nebraska at many different races in the years that followed. This includes individual competition at local races as well as team competitions at Market to Market, Hospital Hill, Shamrock Shuffle and USATF Club XC.

In the fall of 2018, LRC Racing and Team Nebraska voted to approve a merger between the two teams and create one unified club to be named LRC Nebraska. Membership exploded to over 125 members and programs were expanded to continue to motivate all members to continue training and racing at a high level.

While I'm definitely simplifying the time periods above, there are memories and stories to be shared within each one of these. As far as where our organization is going, it is still up to the membership base to determine that. I have always said that the team will be whatever people want it to be. At the end of the day, it's each and every team member who add to the culture of our organization and built on the storyline by training, by connecting with others in the running community and by racing.

Hope you have enjoyed a bit of a history lesson. Happy Running!