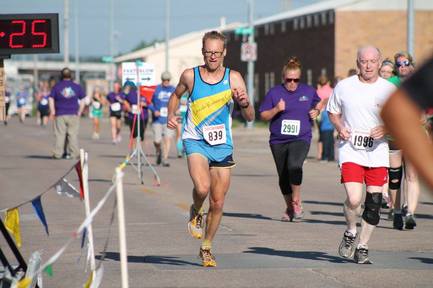 The 31st Annual Downtown Runaround in Columbus, NE signifies the 6th anniversary for LRC Racing as a competitive team in Nebraska.  While historically the team has had a large contingent of runners at the race, 2016 was a more challenging year as many runners are coming off “down time” of training, injury, and in some cases, both.  The women led the way this past Saturday as Michelle Paxton (30:27) wom the women’s race, with Michelle Schmidt (32:46) and Amy McCracken (33:04) finished second and fourth, respectively. Amy was the first overall masters woman to finish the race and all three women are now on the team’s top 10 charts for the 5 mile distance.